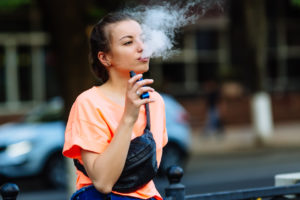 Vaping, a common term for smoking e-cigarettes, is an activity that has become exceedingly popular among people of all ages. Vaping has been pushed as an alternative to smoking and has also been marketed towards young people partly because they offer many unique flavors. Doctors have always warned of the potential dangers of vaping; e-cigarettes contain addictive substances like nicotine and THC, as well as many other potentially dangerous chemicals. The recent reports of illness and deaths caused by vaping has caused alarm with deaths being reported in 15 states.

As of October 1, 2019, there have been 18 deaths caused by vaping that were reported in the United States alone. The Centers for Disease Control and Prevention (CDC) is currently reporting over 1,000 cases involving illness caused by vaping. More and more stories of people of all ages being hospitalized for lung problems caused by e-cigarettes. The specific substance responsible for these deaths has not been identified, but 80% of vaping health complications occur in people under the age of 35, and 16% are under the age of 18. A wide range of people including parents, young teens, and professional athletes, have been some of the people affected by these illnesses. The CDC has stated that the illnesses are likely due to chemical exposure and they are dedicated to figuring out specifically which chemical, or product, is responsible for them. The sudden outbreak of sickness and death caused by vaping has been labeled by some as a public health crisis.

There is a wide variety of symptoms associated with the illnesses currently being reported. The most serious of them being a pneumonia-like sickness that has resulted in hospitalization. Signs like nausea and coughs have also been noted. Other symptoms include weight loss or shortness of breath. A large amount of the patients affected have experienced a fluid build-up in their lungs which prevents the body from getting enough oxygen to breath and circulate through the blood stream. These sicknesses have resulted in diagnoses of respiratory problems, respiratory failures, or lung diseases, and have even resulted in medically induced comas. Intensive care and respirators have been necessary for treatment of the patients affected.

How It Affects You

If you have smoked any form of e-cigarette and are experiencing some of these symptoms, it is urgent that you contact a medical provider due to the quick and dangerous escalation of symptoms noted in some of the cases. Doctors have reported their fear that those affected by these diseases may never fully recover or be able to return to the level of activity they had before their diagnosis. We encourage a refrain from smoking any type of e-cigarette for those still vaping, for your own safety and wellbeing.

Multiple school districts have filed lawsuits against the company Juul due to their explicit marketing towards teenagers. Individual lawsuits and class actions have also been filed against vaping companies like Juul on the grounds of causing illnesses including strokes and seizures. Vaping sales have been banned in multiple states including Michigan, California, New York, Massachusetts, and Rhode Island. These emergency bans have ranged from just banning flavored vape products, to all nicotine products in San Francisco. This will continue to be an ongoing issue as more specific information is released.

If you or someone you know is suffering because of an illness caused by vaping, please contact the attorneys at Kidneigh & Kaufman, P.C.